The History of “Flag Day”

Did you know that Flag Day was first celebrated in Wisconsin? 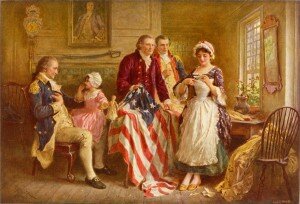 The “Stars and Stripes”, the official National symbol of the United States of America replaced the British symbols of the Grand Union flag with a new design. Authorized by the Continental Congress on that Saturday of June 14, 1777 in the fifth item of the days agenda. The entry in the journal of the Continental Congress 1774-1789 Vol. Vlll 1777 reads “Resolved that the flag of the thirteen United States be Thirteen stripes alternate red and white: that the union be thirteen stars, white in a blue field, representing a new constellation.”

Tradition says, although it is not certain, this flag may have been made by the Philadelphia seamstress Betsy Ross, who was an official flag maker for the Pennsylvania Navy. The number of stars increased as the new states entered the Union, but the number of stripes stopped at 15 and was later returned to 13. 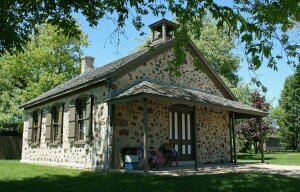 The Fourth of July is celebrated as America’s birthday, but the idea of an annual day specifically celebrating the Flag is believed to have first originated in 1885 in Fredonia, Wisconsin Public School District 6. Bernard J. Cigrand, a nineteen year old teacher at Stony Hill School, placed a 10” 38 star flag in an inkwell and had his students write essays on what the flag meant to them. He called June 14th the flag’s birthday. Bernard J. Cigrand was first and foremost an American patriot. From the 1880s through the 1930s, he preached respect and honor for the nation and its flag.

The next year, Cigrand made his first public proposal for the annual observance of the birth of the flag when he wrote an article titled “The Fourteenth of June” in the Chicago Argus newspaper. He also wrote to other newspapers and magazines, getting the attention of people nationwide.

On June 14, 1889, George Balch, a kindergarten teacher in New York City, planned appropriate ceremonies for the children of his school, and his idea of observing Flag Day was later adopted by the State Board of Education of New York. On June 14, 1891, the Betsy Ross House in Philadelphia held a Flag Day celebration, and on June 14 of the following year, the New York Society of the Sons of the Revolution, celebrated Flag Day.

In 1894, the governor of New York directed that on June 14 the Flag be displayed on all public buildings. Meanwhile in Illinois, an organization known as the American Flag Day Association, was organized for the purpose of promoting the observance of Flag Day.

His crowning achievement came 17 years after his death. In August 1949, President Harry Truman signed the legislation and proclaimed June 14 as National Flag Day.

The President is requested to issue each year a proclamation to call on government officials in the USA to display the flag of the United States on all government buildings on Flag Day; and to urge US residents to observe Flag Day as the anniversary of the adoption on June 14, 1777, by the Continental Congress of the Stars and Stripes as the official flag of the United States.

Flag Day falls within National Flag Week, a time when Americans reflect on the foundations of the nation’s freedom. The flag of the United States represents freedom and has been an enduring symbol of the country’s ideals since its early days. During both events, Americans also remember their loyalty to the nation, reaffirm their belief in liberty and justice, and observe the nation’s unity.