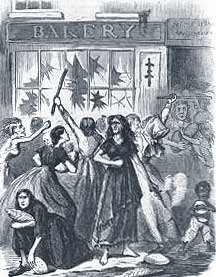 1863, amidst the American Civil War, hundreds of women in the city of Richmond, Virginia began rioting in demand of a release of emergency food rations from the Confederate government. The event took on the name of the Richmond Bread Riot. The food shortage was due to farmers growing cotton and tobacco rather than food, creating a shortage of consumable produce. In addition, tax on agricultural products was at 10% thereby creating more revenue for the Confederate government.

1841, President William Henry Harrison died in office from pneumonia at the age of 68. He is the first president to have died while serving. He took the oath of office on March 4 during a rainstorm and even rode in his inaugural parade, in the rain, without a hat or coat. He delivered the longest inaugural address of any president—nearly two hours long. He served as President for only 32 days and was the oldest president until Ronald Reagan.

1820, the arm-less statue known as the “Venus de Milo” was found on the Aegean island of Melos.

1943, in an attempt to curb prices and inflation, President Roosevelt declared a freeze on wages and prices, and stopped utility companies from raising their prices.

1867, the measure to purchase Alaska from Russia was approved by the U.S. Senate. April 11

1970, Apollo 13 launched from Kennedy Space Center in Florida with three men aboard. Lovell, Swigert and Haise were to land on the moon but two days into the mission an oxygen tank exploded, causing a power loss and other problems, forcing the crew to produce a makeshift repair and return to earth. The men survived re-entry and splashed down on April 17 in the south Pacific Ocean.

1861, the U.S. Civil War had officially begun this day when the Union command at Fort Sumter, South Carolina surrendered to Confederate forces. The fort had been bombarded from the harbor for 33 hours before surrendering. The only casualty from the battle was a Confederate horse.

1521, at the Diet of Worms, Martin Luther refused to recant his writings, thereby being branded an outlaw and heretic.

1945, WWII news reporter Ernie Pyle was killed by Japanese machine gun fire off the coast of Okinawa on the island of Le-Shima (Lejima). He had reported from the London Blitz in 1941 and saw live combat action in North Africa, Italy, France and in the Pacific.

1897, the first Boston Marathon was held. Ten runners finished the race but fifteen started. It was 24.5 miles long and was increased to 26 miles in 1908. Sadly, four days shy of the 117th Anniversary, two lone terrorists sabotaged the Marathon by planting a couple of bombs near the finish line.

1895, the first film projector was demonstrated by the Latham brothers in New York City. It was similar to Thomas Edisonʼs kinetoscope except instead of one person viewing the moving picture in a kinetoscope, an entire audience could view the movie simultaneously.

1963, as a 14-year-old freshman in high school, Little Peggy March recorded a song that went to number one on the U.S. pop music charts. A record still held today as the youngest recording artist to hit number one.

1947, the voyage of the Kon Tiki began as Thor Heyerdahl and his crew of five left Peru on a balsa wood raft to test his theory that ancient Peruvians could have settled in the Polynesian islands.

1986, the USS Enterprise became the first nuclear powered aircraft carrier to pass through the Suez Canal.

1945, the German army in Italy surrendered unconditionally to the Allies.

1789, George Washington took the oath of office from a balcony in Federal Hall in New York City.